Breakfast with the President – Clint Abernathy

Join us for the next event in our Breakfast with the President Series!

This event will be held via Zoom. 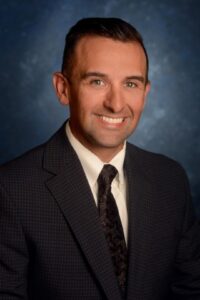 Clint Abernathy serves as president of Texas Health Alliance, with a focus on safe and quality patient care.

Abernathy and his team view their work as a ministry to the community. Texas Health Alliance serves more than 50,000 patients each year and connects with the community outside the walls of the hospital by providing more than 9,000 service hours. Under his leadership, the hospital was honored as one of the 2017 Truven Top 100 Hospitals in the nation.

He joined Texas Health Alliance in 2012 as professional services officer and played an integral role in efforts to open the facility. During that time, he recruited and worked with physicians on the medical staff and oversaw ancillary services, including the Imaging, Laboratory, Pharmacy, Cardiopulmonary and Rehabilitation departments. He also led the Texas Health Convenient Care Clinic and Outpatient Surgery Center and spearheaded process improvements throughout the hospital.

Previously, Abernathy served as administrative director of Operations and Clinical Excellence for Texas Health Dallas. He was also the hospital’s director of Performance and Productivity from 2007-2011. During that time, Abernathy implemented process improvements that helped reduce costs and improve quality of care.

He served as a Lean Six Sigma black belt and associate plant manager for Fresenius Medical Care from 2005-2007 and the quality assurance supervisor for PCI Technology from 2003-2005.

Abernathy received his bachelor’s degree in biology from the University of Dallas and a master’s degree in health care management from Champlain College in Burlington, Vermont. He is a Lean Six Sigma master black belt and a certified quality engineer, as designated by the American Society for Quality.

He serves as board president of the Northwest Independent School District Education Foundation and is involved with the March of Dimes Strategic Leadership Team, DFW Hospital Council, Healthy Tarrant County Collaborative and the Northeast Tarrant County Leadership Team. He is also a volunteer and welcome team member at Keystone Church.

He enjoys everything outdoors in particular taking care of his horses, cows and spending time with his wife, Stephanie, and their four daughters.