Cocktails with the Chiefs: Funding the Future of Healthcare in Texas 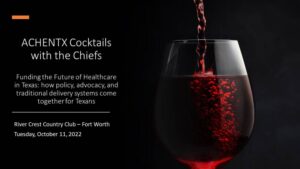 Don’t miss out on this popular event!

Reserve your ticket now for our next ACHENTX Cocktails with the Chiefs event. We’re back in Fort Worth for this program and this time, our content topic will be: Funding the Future of Healthcare in Texas: how policy, advocacy, and traditional delivery systems come together for Texans. The panel will be preceded by a networking cocktail reception.

Our guest panelists for this event will include: 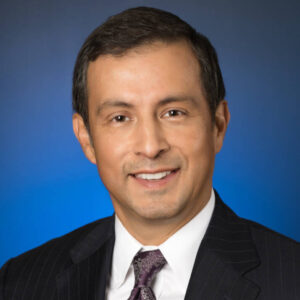 DeLeon is an active leader in the community, serving as chairman of the boards of Texas Rehabilitation Hospital and the Tarrant County March of Dimes, American Heart Association, and on the boards of North Texas Community Foundation and the Healthy Tarrant County Collaboration. He previously served as Chair of the Fort Worth Hispanic Chamber of Commerce. DeLeon has been recognized many times for his leadership of the hospital, including a 2017 Minorities in Business Award from the Fort Worth Business Press. He is a former captain of the United States Air Force Medical Services Corps and has served in health care management since 1991. A graduate of Leadership North Texas, Leadership Fort Worth and Leadership Bryan-College Station, DeLeon was previously named to the Fort Worth Business Press 40 under 40 and holds a Certificate of Leader Development from the U.S. Army War College Commandant’s National Security Program.

Clint Hailey serves as senior vice president and chief managed care officer of Tenet Healthcare Corporation, overseeing managed care strategy development, and contracting operations for all entities with all managed care companies nationally. He reports to Dan Cancelmi, Tenet’s chief financial officer. Prior to joining Tenet, Hailey was vice president of managed care for the Hospital Corporation of America’s (HCA) Texas operations, where he was responsible for directing the development of managed care strategies and negotiating contracts for 34 acute care hospitals and 26 freestanding surgery centers in Texas. Hailey earned his bachelor’s and master’s degree in business administration from Texas Christian University and his juris doctorate from Texas A&M University School of Law. He is a member of both the American and Texas Bar Associations and is a Fellow of the American College of Healthcare Executives. 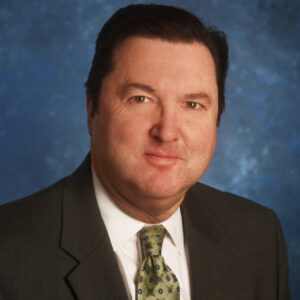 Rick assumed his current role in late 2018 after serving in numerous leadership roles since joining the system in 1990. Most recently, he was the Chief Financial Operations Officer for Texas Health, where he implemented the system’s board-approved financial sustainability policy, which establishes the prudent deployment of financial resources and provides funding to fulfill Texas Health’s Mission to improve the health of the people in the communities we serve. In addition, he implemented the system’s financial compliance and tax-exempt bond compliance programs, which monitor more than $2 billion of debt.

Over the years, Rick has provided financial oversight across the Texas Health system, as well as serving on several of the system’s joint ventures’ boards and committees. He played a significant role in the development of financial controls and processes for Southwestern Health Resources, an integrated network that blends the strengths of UT Southwestern Medical Center and Texas Health. Additionally, McWhorter represents the system as a member of the subscriber advisory and finance committees for Premier AEIX, a professional liability risk retention group with other health systems across the country.

Outside of Texas Health, Rick has previously chaired the healthcare education committee for the Texas Society of CPAs, served a three-year term on the United Way of Tarrant County board, and a three-year term on the Advisory Board of the Boy Scouts – Circle 10. He is currently serving as a member of the board and executive committee for Texas Wesleyan University and is Texas Wesleyan’s current chair for its Finance and Audit Committee.

Rick earned his Bachelor of Business Administration in accounting from Texas Wesleyan University and is a licensed certified public accountant in the State of Texas. He is a certified healthcare financial professional and fellow of the Healthcare Financial Management Association. 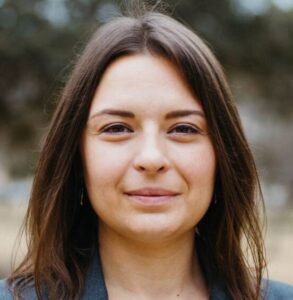 Anna Stelter, LMSW, MPH, is Senior Director, Financial Policy at Texas Hospital Association, where she monitors health care financing and supports the association’s public policy activities related to hospital payments, Medicaid, Medicare, and the state budget. She joined THA in 2021 after three years as a public health policy analyst at Texas Medical Association, where she coordinated the Texas Public Health Coalition and led the association’s behavioral health and pediatric health activities. She began her career as a policy analyst at Texas Health Institute monitoring Affordable Care Act-related coverage gains in Texas. She earned a Master of Public Health from the University of Texas School of Public Health, and a Master of Science in Social Work from The University of Texas at Austin.