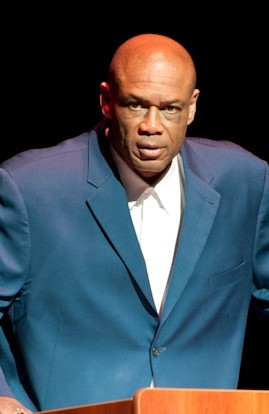 Tickets will be selling fast. Be sure to take advantage of the early bird pricing options and get your ticket soon. Individual and table tickets are available.

Tony Hill graduated from Stanford University with a 3.3 GPA in Political Science at the age of 20 and is a member of the Stanford Athletic Hall of Fame. Nicknamed “Thrill”,

He spent 10 successful seasons in the NFL with the Dallas Cowboys where he helped them become “America’s Team” by leading them to Super Bowls XII and XIII and six playoff appearances. A Three-Time Pro Bowl selection, Hill is the third All Time Leader in receiving yards with 7,998. During his ten-year career with the Cowboys, Tony led the team in both receptions and yardage for eight of those ten years. His 479 receptions are fifth on the Cowboys’ All Time List behind Jason Witten, Michael Irvin, Dez Bryant and Drew Pearson. Hill’s 51 Touchdowns also rank fifth on the All Time Cowboy list behind Dez Bryant, Bob Hayes, Michael Irvin and Jason Witten. He finished his career with 8,072 total yards (Rushing and Receiving), making him the team’s fifth All Time Leader in that category behind Hall of Famers’ Tony Dorsett and Emmitt Smith and future Hall of Famers’ Michael Irvin and Jason Witten. Tony, Drew Pearson and Tony Dorsett were the first threesome to accumulate 1000 yds during a season in the NFC (National Football Conference). Known for his quick speed and big play ability, Coach Landry called him … “Our Home Run Hitter”. I have never seen a guy who can adjust to a ball in mid-air like Tony. He is a very explosive player; the type who can turn a short play into a big play in a hurry, because he has excellent running ability and speed.”

Tony is the Resource Development Manager for the City of Allen. He promotes parks and recreation activities and serves as a liaison between the recreation division and other divisions, departments and outside agencies. In his spare time, Tony serves as an analyst for Compass Media Network / Westwood One broadcasting the national collegiate game of the week. Tony was in the Broadcast booth doing the stateside television commentary for the CFL (Canadian Football League) as well as a fun stint on ESPN Hollywood as an “Inside Reporter” for the hit television show “Survivor – Guatemala”. Tony still works with the NFL for all Cowboy home games as a league representative, making sure sponsors are appropriately identified on the field and all the official rules for the players are enforced during the game. Some of Tony’s achievements include host of an All-Night Radio Call- in Show in Boston, Massachusetts, National Color Analyst for Arena Football on Prime Network and for two years, host of SportsTalk, a 5-7pm drive-time sports radio talk show in the Dallas area.

Tony served as the North Texas Honorary Chairman for the Juvenile Diabetes Foundation for 16 years. He also served as Vice Chair and member of the Board of Trustees of Texas Health Presbyterian Hospital of Allen.

Tony is married to Millie. They have four children, Cassidy, Kelli, Leslie and Anthony.

Tony ranks second in receiving yards, third in receiving touchdowns and fourth in catches in Dallas Cowboys history. A graduate of Stanford University, Tony is a member of the Stanford Athletic Hall of Fame.